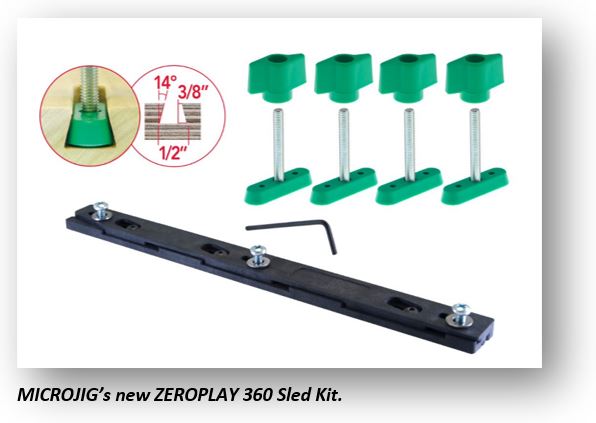 MicroJig, a provider of table saw accessories, has unveiled its latest innovation, the ZerroPlay 360 Sled Kit.

Building a sled with the ZeroPlay 360 Sled Kit is fast and requires minimal materials. To create a custom sled, simply cut plywood to size, route dovetail grooves with a ½-inch, 14-degree dovetail bit and install the ZeroPlay Miter Bar.

With ZeroPlay’s one touch calibration, woodworkers can fill the full width of the miter slot without side-to-side movement, and the dovetail grooves allow users to set the fence at any angle with the MatchFit Dovetail Hardware. No matter at which angle a person is cutting, the ZeroPlay Miter Bar keeps the sled parallel to the blade at all times. The kit can also be used with MicroJig’s MatchFit Dovetail Clamps to give woodworkers even more control and precision, especially for tricky cuts.

“MicroJig thinks very deeply about the product experience,” Henry Wang, founder of MicroJig, said in a statement. “The ZerreoPlay 360 Sled gives you a complete range of cutting angles when most sleds are fixed or limited in range. It gives you 360-degrees in cutting capacity and unlimited scale for material size.”

For more, visit booth No. 7849 at AWFS and www.microjig.com.

EnRoute 7 is SAi’s most powerful version yet

April 13, 2021 Chris Cirilli Comments Off on EnRoute 7 is SAi’s most powerful version yet

A work cell with brains and brawn

April 13, 2021 Chris Cirilli Comments Off on A work cell with brains and brawn