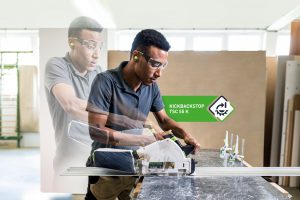 The new saw senses the moment of kickback during a cut — which can cause the tool to lurch backward toward the operator. The kickback stop feature immediately seizes the rotation of the motor, halting the blade in the blink of an eye. After the kickback stop automatically activates, the saw is ready for use again with zero downtime, according to the company.

“The TSC 55 K builds upon the precision, speed and durability of Festool’s proven cordless track saw, released in 2015. With an eye toward exacting accuracy, our new cordless track saw promises to make precise cuts more repeatable, safer and, overall, just plain better — a foundation of innovation that our company and our brand have been built on. The TSC 55 K and its proprietary innovations clearly demonstrate our unceasing commitment to our customers,” says Rick Bush, product marketing manager for Festool.

For more, visit booth No. 1346 at AWFS and www.festoolusa.com.

May 30, 2019 Mary Lou Cooke Comments Off on Don’t miss the SMART sessions at AWFS